Trophies and free event t-shirt given to you and your pitcher:
• “The Ultimate Bomb Dropper” the Softball Longest Drive Event Champion
• Longest single drive
• Most total distance on the day (all your hits added up for total distance)

Who is Homers for Hope?

Homers for Hope Inc. is an official 501C3 charitable organization based in Drexel Hill, PA just outside of Philadelphia. EIN #30-0702533.

Our mission is to raise money for local families who are struggling financially due to a tragic event. Families never receive cash of any kind. They submit bills for payment. Talk to your accountant to understand the tax deductibility of your donations. 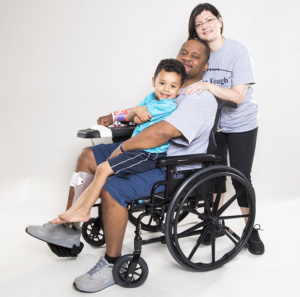 In October 2017, Christopher McIver was rushed to the hospital after having collapsed at work. His wife, Jenna, was notified that he’d been hospitalized, and when she arrived, she was given news that no spouse should ever have to hear: The man to whom she’d devoted 12 years—the man with whom she had a 4-year old son— had suffered a spontaneous ruptured brain aneurysm that was bleeding out.

The doctors determined that Chris suffered from what was called an Arteriovenous Malformation, AVM. Brain AVM’s are extremely rare and affect less than 1 percent of the population. Most people are born with them and over 60% die after one ruptures. The doctors at Jefferson Hospital were forced to remove a section of Christopher’s skull to ease the bleeding, and Jenna regards it as a miracle that the heroic efforts of the doctors were able to bring Christopher back from the brink of death. He suffered a massive stroke and in the days that he woke he was unable to speak or move.

But even after pulling through the touch-and-go stage of his crisis, the damage had been done. Christopher spent a month in the ICU. He lost his ability to speak and his entire mobility on his right side of his body. He was only able to communicate through thumbs-up and thumbs-down gestures. In the months that followed, the therapists and doctors that surrounded Christopher tirelessly worked to help him survive his ordeal.

Still, even in the darkness of tragedy, Christopher is surrounded by his loved ones and miracles continue to happen: During his recovery, he began eating without the help of a feeding tube and was able to speak his name. Further therapy allowed Christopher to count to 10 and even tell his wife that he loves her, as well as smile at pictures of their son Tristan. He was released from ICU and was transferred to a rehabilitation center on where he spent 4 months in intense therapy.

Over the last year Chris has continued to make improvements but still has limited mobility and has Aphasia with limited speech communication. His wife Jenna has been his advocate and has struggled financially supporting their new life and continued therapy and medical bills. Currently, they have not been approved for disability and they are trying their very best to make ends meet. Chris was the breadwinner of the household working 3 jobs prior to this injury. Now the responsibility is left on his wife. They are grateful for any assistance that the wonderful volunteers of Homers for Hope can provide.